CONTINUE THE MISSION OF CHRIST

THE HISTORY OF THE DIOCESE

When the Diocese of San Pablo was created, there were only six (6) vicariates, thirty-three (33) parishes, and forty (40) priests spreading the word of God. Its first Bishop was Bishop Pedro N. Bantigue, DD, who served the diocese for almost 29 years. He was succeeded by Bishop Francisco C. San Diego, DD, who took canonical possession of the diocese on Aug. 22, 1995. After almost eight (8) years of service in the diocese, he accepted his appointment as the first Bishop of Pasig. For almost a year, the diocese was vacant (sede vacante). Bishop Bernardino C. Cortez was the elected Diocesan Administrator until the appointment of the Bishop Leo M. Drona, SDB, D.D., the third Bishop of San Pablo, on May 14, 2004. After the Holy Father accepted his resignation in 2012, a new Bishop was appointed for the Diocese. The fourth and present Bishop of San Pablo is Bishop Buenaventura M. Famadico, DD, formerly the Bishop of Gumaca. He was appointed on January 25, 2013 and was canonically installed on March 2, 2013.

After fifty-five (55) years since its erection, the Diocese has 4 episcopal districts, 13 vicariates and 91 parishes. There are five (5) male Religious congregations who administer 10 of these parishes. Presently, the Diocese of San Pablo has 141 diocesan priests, and around 60 male and female religious congregations who comprise the Association of Religious in Laguna (ARELA). The Diocese has a Diocesan College Seminary - St. Peter’s College Seminary, located in the seat of the diocese at San Pablo City, and the other one is in Tagaytay - San Pablo Theological Formation House. Including many lay movements and religious organizations, the Diocese of San Pablo is a dynamic local church in the Southern Tagalog region.

THE COAT OF ARMS 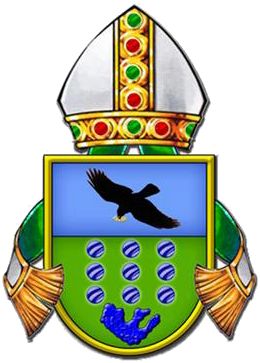 On the Superior [Upper] Section of the Shield is a Crow with a piece of Bread in its Beak. It symbolizes the providential feeding of St. Paul the First Hermit during his long sojourn in the desert. Each day, the Crow brought a half piece of bread for his physical sustenance. When St. Anthony the Abbot discovered his presence and stayed for a while.T he Crow brought a whole loaf of bread to signify that God takes care of the needs of his two faithful servants.

On the Inferior Section of the Shield is the Nine Blue and White Circles and a Blue Lake. The Nine Blue and White Circles represent the nine lakes that are found in the Province of Laguna and the City of San Pablo. In San Pablo, the city of the Seven Lakes, we encounter the lakes of Sampaloc, Bunot, Palakpakin, Kalibato, Mohicap, Pandin and Yambo. The Eighth Circle represents the man-made Lake Caliraya and The Ninth Circle represents the great fresh water lake, La Laguna de Bae, that gave the province its name.

The Blue Lake is the actual shape of the Laguna de Bae, the principal natural geographical formation that gave the province its name and forms the natural boundary between the Province and the Province of Rizal and Metro Manila. The Diocese chose the words of Psalm 92:12: “Iustus ut Palma Florebit,” (and the just will flourish like the Palm tree) as its motto.

THE PATRON SAINT OF THE DIOCESE

St. Paul was born in Egypt and was orphaned at the age of fifteen years old. In the year 250 A.D., the persecution of Emperor Decius began, and this forced St. Paul to hide in the house of his friend and later fled in a cave in a desert. He planned to return to Egypt when the persecution was over but God has His own plan. For the next 90 years, he lived in the cave and was only nourished by the spring for a drink and a palm tree for clothing and nourishment. It was also said that a crow was bringing a piece of bread to him each day. St. Paul on the other hand continued to pray in solitude and practiced asceticism as part of his devotion.

St. Anthony of Egypt met St. Paul in the desert of Egypt when the former thought that he was the first to set in solitude in the desert. The two became friends. The crow began to bring a whole loaf of bread instead of the usual half. St. Anthony predicted that he would be burying his friend. St. Paul died in c. 341 and was buried by St. Anthony himself, wrapping the First Hermit in a cloak given by St. Athanasius. It was believed that St. Anthony was assisted by two lions when he was burying St. Paul.